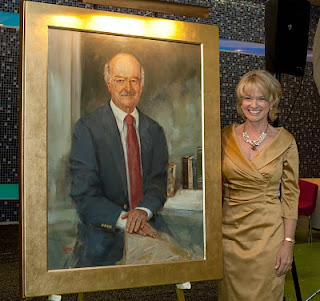 On February 24, the new Phoenix Children's Hospital unveiled my portrait of Daniel T Cloud, MD, its founding President and CEO. In my former life as a hospital administrator, I was hired by Dan in May of 1983 to coordinate the establishment and opening in September, 1983 of Arizona's first independent children's hospital.

I worked for Dan for the next 7 years and he remained my close and valued friend until his death last summer.

The hospital officially opened the doors to the new $538M facility on January 31, 2011.

Photo courtesy of Suzanne Starr Photography, Phoenix, AZ. Thanks to Kay Eskridge Photography in Phoenix, AZ for her assistance in providing photo reference material for the painting.

The short video is here on Facebook . I'll add it to the blog when I can.