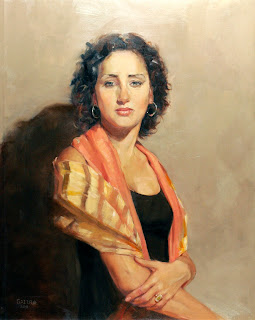 It's really an honor to be included in this show - there were over 520 submissions representing 26 states across the US, Canada, Spain, Germany, the Netherlands and the Philippines.

"Juror Ellen Simak conducted a blind jury (i.e. all artists/images were presented to her numerically without artist names) and she selected a show of 36 incredibly strong works from all over the world."

The opening reception is September 7, 2013, from 2:00-8:00 p.m. with a live painting demonstration "Art Throw Down" between artists Cindy Procious and Mia Bergeron. The show runs through September 28.
Posted by Chris Saper at 12:13 PM 1 comment:

Artists' Magazine Article, "On the Threshold"

I've had some request to share this article on understanding and painting the subtle differences as subjects move from childhood through adolescence, into young adulthood. Originally printed July 2010, Artists' Magazine. If you have difficulty reading it, let me know and I'll be happy to email it to you:) 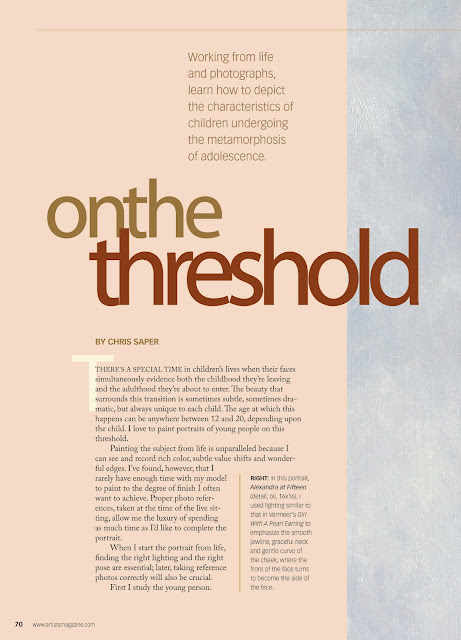 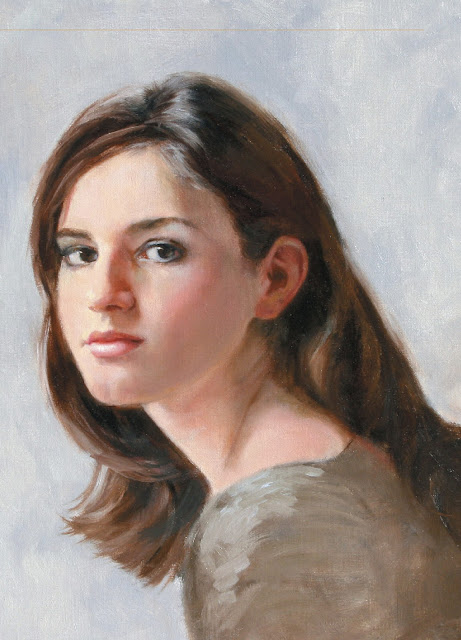 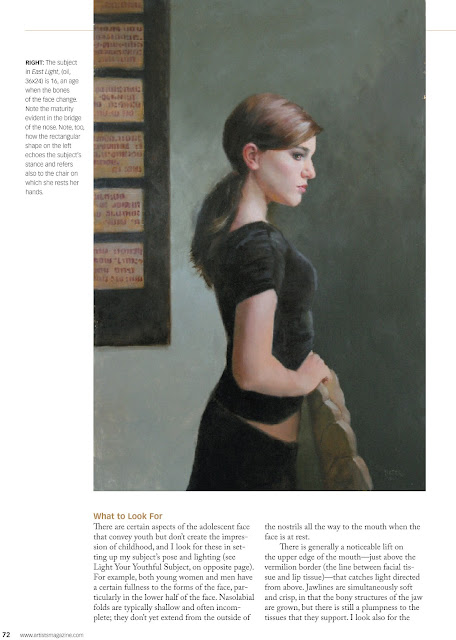 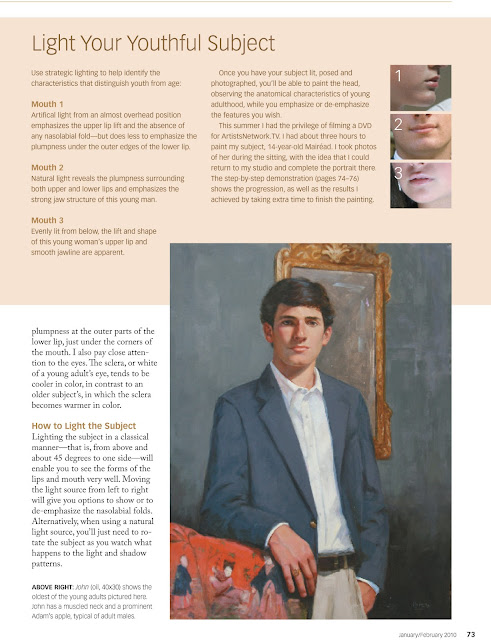 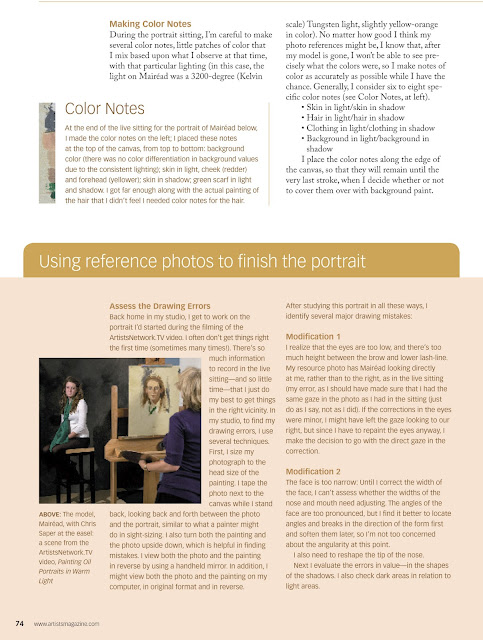 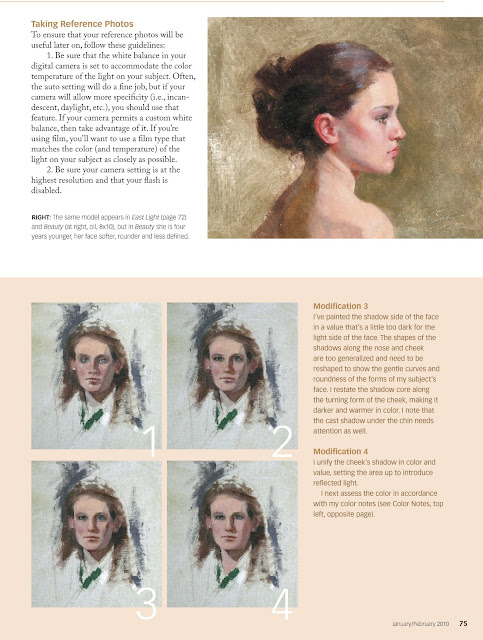 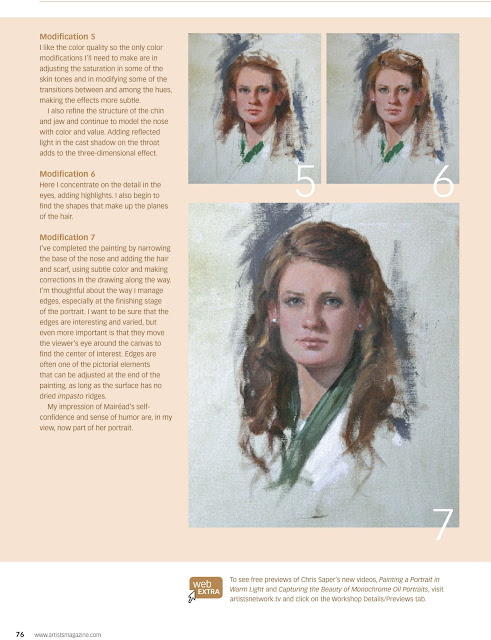 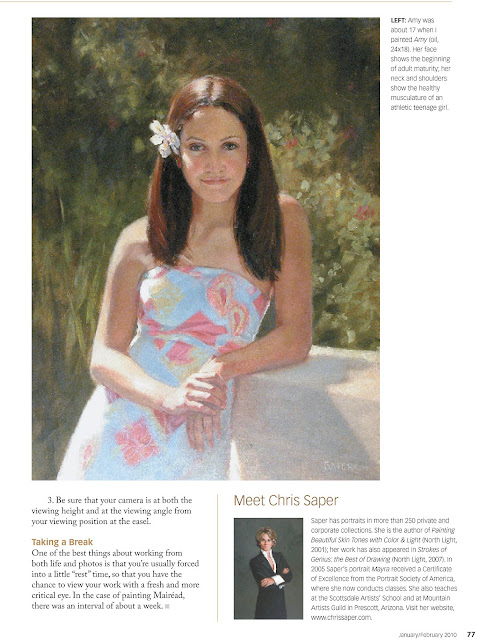 Posted by Chris Saper at 5:32 PM No comments:

On July 11, 2013, I attending the unveiling of my portrait of Chief Judge Wells, Third District Court of Appeal, in Miami. Over the course of this commission, I came to know Judge Wells and her husband on not just a 'business-as-usual' basis, but as the gracious and generous couple they are.

Here are some photos of the process: 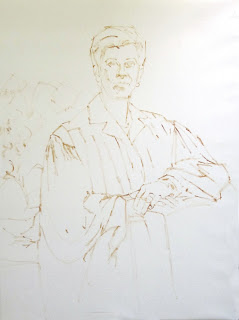 Above, oil sketch on stretched oil-primed linen. I spend a LOT of time working out the figure placement and composition before ever picking up a brush. 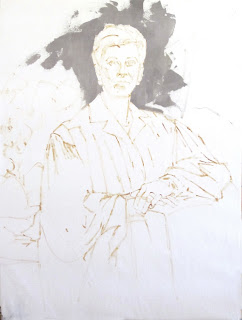 Above, the first thing I do in preparing to paint any part of my subject is to commit to a color and value for the background -it's nearly impossible for me to make any remotely accurate judgement about skin tones without adjacent color and value context. In this case, at the photo sitting,I had made the decision to light Judge Wells with a cool artificial light (6500 * K), to bring out the silvery tones in her hair and clothing. 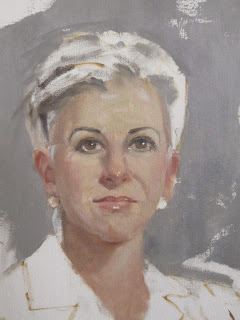 Above,  I've worked the skin tones and likeness far enough to begin working on the rest of the canvas, and left most of the hair still unpainted, so that I could go back in wet-in-wet to control the edges of the hair against skin and against background.. 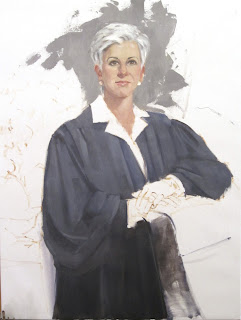 Above, I've painted the robe, so as to set up the edges that will be integrated with the hands and blouse.
Below, detail of Judge Wells's hands. She is wearing her West Point ring, and an antique bracelet. 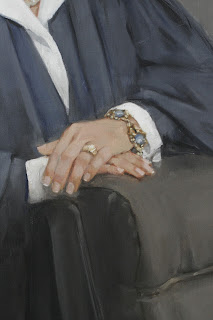 The finished portrait below. From the early planning stages, I used areas of  both soft and crisp lights to move the eye around the canvas, all in support of my focal point. The orchids were in Judge Wells's office and I just managed their value, exact placement and edges to establish a rhythm to the surface.

Judge Wells is the first female Chief Judge in the District's history. I thought that the orchids brought a bit of femininity to the concept, atop some of her legal books. 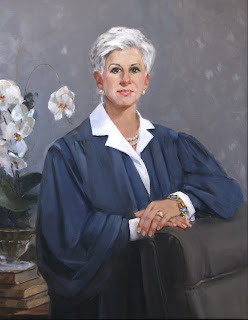 Montgomery Frames in Tempe, AZ did a fantastic job making the frame - I couldn't have been more thrilled! I stretched the linen on to heavy duty stretcher bars, so Dave at Montgomery added sufficient extra depth to the frame so that it would hang flush on the wall, instead of canting forward. 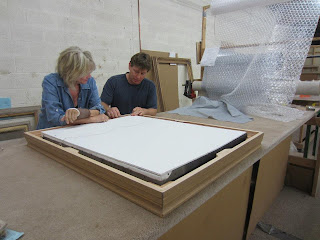 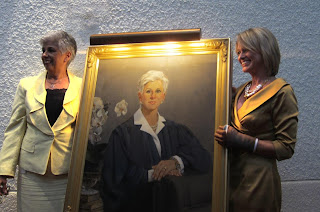 ...and here she is on the courtroom wall: 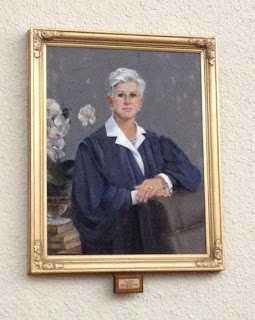 ...and of course a very short video of the unveiling:

My Aunt Mai and I had planned to see the Boca Art Center's Florida Juried Art show, but when we got to the museum it was closed for repair - instead she took me to the Morikami Garden in nearby Delray Beach - what serendipity!

"Wood Be: Kindred Spirits" was on exhibit, as were the ongoing Tanabata events, neither of which had I ever heard.  The Robert J Brokup Kokeshi doll collection was beautiful, with a variety of very simple wood-turned forms, some of which were long and sylph like, some Botero- like. Many had a wind-swept sense of  movement.

Here are some of my favorites: 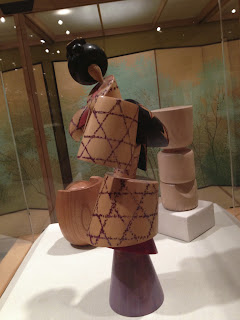 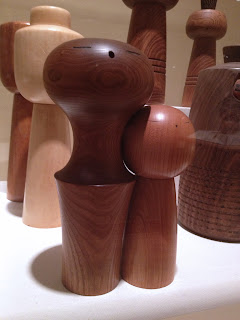 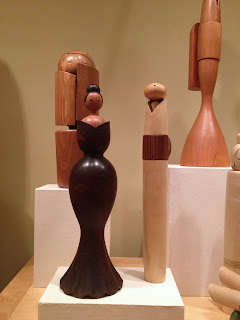 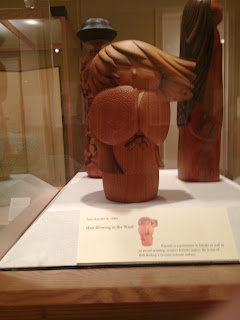 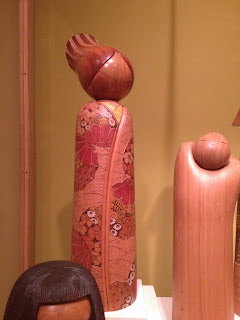 The garden walk takes about an hour, everything just exactly perfect. It would be a perfect place for lazy  pleine-aire painters since so much of the composition is already done and edited:)

I don't know what it is with me and heart-shaped trees lately, but they seem to be everywhere. 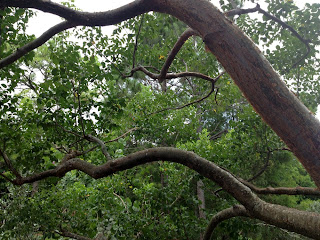 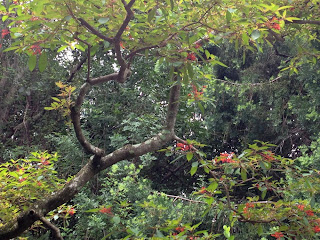 and for the oblivious-at-heart, a literal heart: 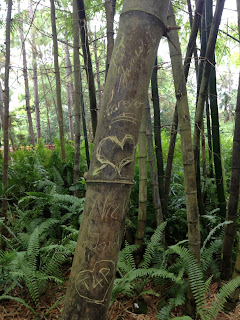 which, incidentally, was next to a sign that said, "Thank you for not carving on the bamboo trees."  Sigh.

Here you can listen to the sounds of the bamboo stalks moving against each other in the wind - some sounds are creaky, some are squeaky.

It's fun to play with (painting) knives and safer than running with scissors:) 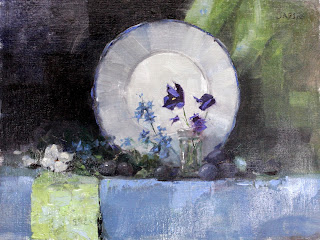 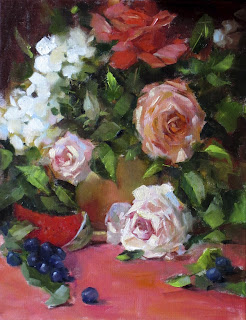 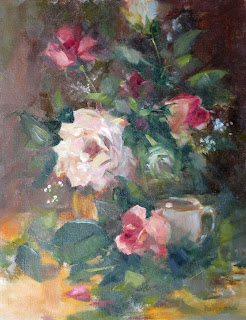