This is just a test slide show from fineartamerica.com

Last month I was able to take a landscape painting workshop with John Budicin (fabulous painter) through the Scottsdale Artists' School program, held in San Diego. What a "WOW" experience, one that I've been really intimidated to attempt in years prior. I learned a tremendous amount from John and met some wonderful artists in the class.

In four days I painted 7 little studies, none of which were very good, but that's not the point. The point is simply to pay attention and paint. As fast as you can:) To say my equipment setup was heavy, awkward and archaic is an understatement, and coming back to Phoenix I got completely excited about the Art of The Cigar Box Pochade, and decided to build myself a little painting box.

The only thing I probably do worse than singing is sewing, and even worse is carpentry. Things never quite line up after I'm done with them. But it was really fun, and even if it's not a thing of grace and beauty it works just fine and I think it's cute. Here are the pics of my box - there's a ton of DYI info on line, and I think that you just have to improvise based upon the particular box you have.

Here's my little Asylum box (well named, no doubt), with a handle and clasp from Home Depot. 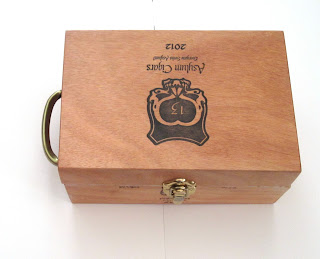 I added some sturdy hinges, and glued a cedar block (from Bed Bath & Beyond) on the back to act as a stop so that the lid won't open too far. 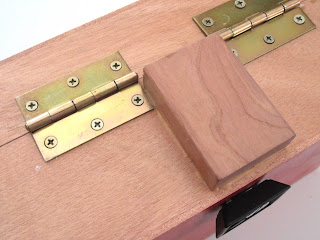 Four small cedar cubes, glued about 1" below the opening, support the little mixing palette, and and provide room underneath for about 8 tubes of paint and a small bottle for turps. 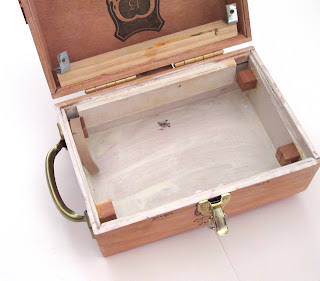 Positioning the cubes on the left added a little support for the screws that secure the handle to the left side. There is a tee-nut in the center of the bottom towards the back, which is where I estimated the balance point to be with the lid open - it screws onto the tripod or quick release head. You can also see that I've used some pieces of wood to add strength on the inside where the hinges are placed. The piece of wood inside the lid has 2 little l-shaped brackets attached which function to hold the panel flush against the front of the upper lid, and are placed so that they rest against the mixing palette ( held in place by the rubber band) and prevent it from falling against the lie. There's enough space inside the lid behind the brackets to secure short brushes with Velcro . 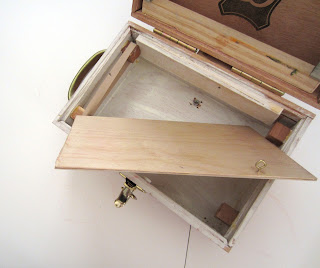 The mixing palette is just a thin piece of craft wood from Michael's and the screw eye makes it easier to lift out.

Here it is in action! I took it for a test drive on the canal near my house, and it worked just fine. I only have 91 paintings to go and then I figure I should know what I'm doing. 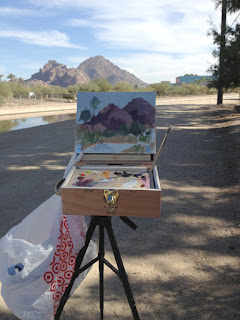 Posted by Chris Saper at 2:47 PM No comments: