So pleased to share this news - on August 2, the Department of Energy and current Secretary Rick Perry hosted the official unveiling ceremony for my portrait of Dr. Ernest Moniz. 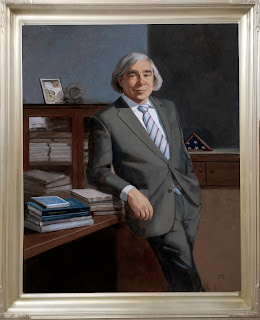 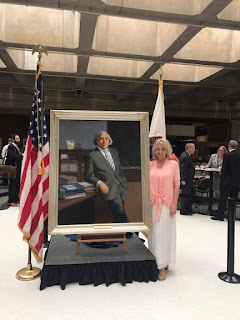 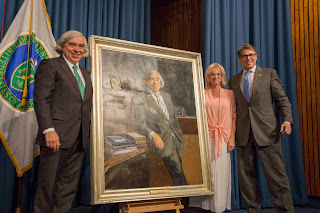 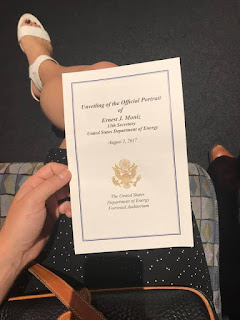 Having the chance to meet and work with Secretary Moniz on this portrait has been one of the highlights in my 27 year painting career. A theoretical physicist, Dr. Moniz has clearly been a working scientist in the years that he served as a cabinet member, and is perhaps most widely known for his role in negotiating the Iran nuclear agreement.

Dr. Moniz spent a great deal of time with me, particularly in selecting the background elements for the portrait. Everything in the painting is there because it represents something meaningful to either his tenure or to him as an individual. The books on the table include the Quadrennial Technology Review, the Quadrennial Energy Review, MIT's Future of Natural Gas, and of course, the Iran Nuclear Agreement, which is the small blue book on top of the others; the small photo on the bookcase was taken at the breakfast table in Lausanne, as Dr Moniz prepared for the final negotiation for the framework agreement by doing calculations on a napkin, which, according to Dr. Moniz,  is what physicists are supposed to do :) 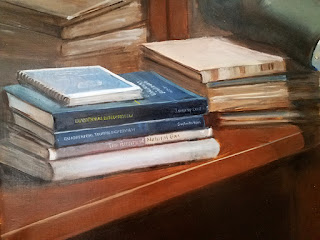 The flag was flown over 22 Department of Energy sites all across the country, including all seventeen national laboratories. during the time Dr. Moniz served as Secretary. The fossil atop the bookcase is from Dr Moniz's collection. There wasn't room to include some of the art that is near and dear to his heart, Indigenous peoples' paintings and sculptures, and his particular interest in Inuit art. However, I was able to work with Montgomery Frames in Tempe, AZ to craft a frame whose corners include a stylistic representation of Inuit design. I would be badly remiss if I did not thank Pat Kofahl and his staff at Esprit D'Ecor in Phoenix for stretching the Artfix canvas for me. They cried over the process so I didn't have to. 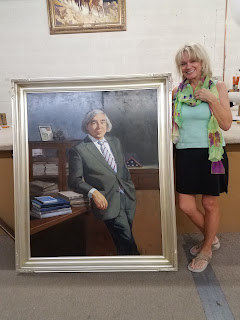 When I walked into Dr Moniz's office on an icy December morning, I was struck right away by his desk, which was loaded to the gills with stacks of folders and papers. He is a working physicist, and I was delighted he agreed to be presented in that manner.

I learned a greet deal about the critical role the Department has played over the years. For example, I had no idea that the Human Genome Project originated with the DoE.

This article from Vanity Fair's Hive is long but a worthwhile read, and gives a great deal of background into the history of the Department.

To see what Dr. Moniz has been up to since his return to MIT this past January, check out the Nuclear Threat Initiative , a project designed to continue and broaden collaborative work to make our world a better and safer place.

If you are interested, you can see the unveiling event in full here; the actual unveiling begins at about 57 minutes.

My heartfelt thanks to Jean Daniel, JDaniel Portraiture, for her work in bringing this commission to fruition, and for her diligence in attending to every little detail.
Posted by Chris Saper at 4:31 PM No comments: